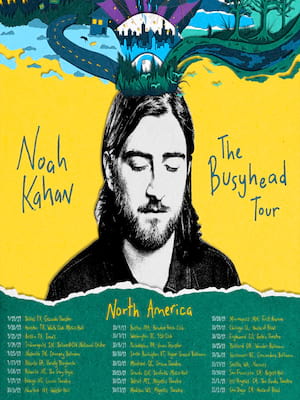 I'd love for everyone to hear this true and honest description of my life and maybe come away being more honest with themselves.

Pop folk singer Noah Kahan shot into the limelight with his first single 'Young Blood' which he released in 2017. The single went on to gain over 9 million streams. He then went on to release 'Hurt Somebody' during the same year which was the lead single off of his debut EP also entitled Hurt Somebody. This single was also extremely successful and propelled Kahan into becoming an exciting new voice to watch out for in pop music.

Now the rising star prepares to embark on his first solo tour hitting several spots across North America just after the release of his debut album 'Busyhead' earlier this year. Subtream Magazine described the album as being "an honest series of snapshots into a particular time in Kahan's world" and a "seamless mix of pop and folk music."

Sound good to you? Share this page on social media and let your friends know about Noah Kahan at First Avenue.