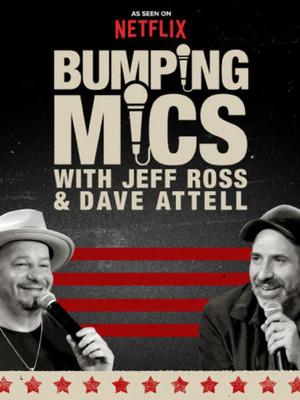 Jeff Ross and Dave Attell, two of America's brightest comics come together on this rip-roaring tour. Best known for his celebrity roasts on Comedy Central Jeff Ross has been dubbed 'The Roastmaster General', with his quick wit and biting observations Ross has become a household name across North America. Now with a Netflix series to their name, don't miss your chance to see Ross and Attell live on stage!

Dave Attell, who's best known for 'Insomniac with Dave Attell' on Comedy Central, has become one of America's greatest cult comics. With his following steadily growing from 1988 Attell has gone onto appear in TV shows such as Everybody Loves Raymond and Arrested Development making his presence well known in America's comedy scene.

Now these two comics forge a path across the states bringing their observations and insults with them, as they bring you their Bumping Mics tour.

Seen Jeff Ross and Dave Attell? Loved it? Hated it?

Sound good to you? Share this page on social media and let your friends know about Jeff Ross and Dave Attell at Mystic Lake Showroom.