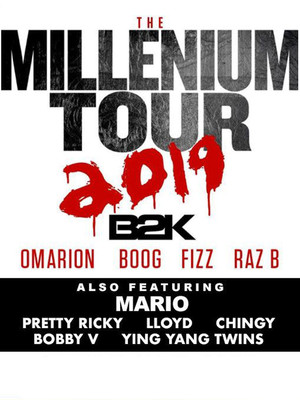 B2K reunite after 15 years for the Millennium Tour!

All aboard the nostalgia train as the chart-topping boyband B2K reunite and invite you to join them on their Millennium Tour. This major 00s reunion will see B2K hitting the road with Mario, Chingy, Ying Yang Twins and more! So grab your scrunchies and your denim jackets and get ready to head back to the noughties.

The Millennium Tour kicks off in March and marks the first time B2K have performed together in more than a decade. The quartet made up of Raz B, Omarion, Boog and Fizz bring you hits including 'Badaboom', 'Bump Bump Bump', and 'Gots Ta Be'.

B2K found their fame in 2000, with hits including 'Take It To The Floor' and 'Do That Thing' which featured Lil' Kim. The band continued to find success in 2002 when they dropped their self titled album and Pandemonium!. Though the noughties saw bands like Backstreet Boys and *NYSYNC take over, B2K continued to shine through with tracks like 'Uh Huh' and 'Girlfriend'.

Sound good to you? Share this page on social media and let your friends know about B2K at Target Center.