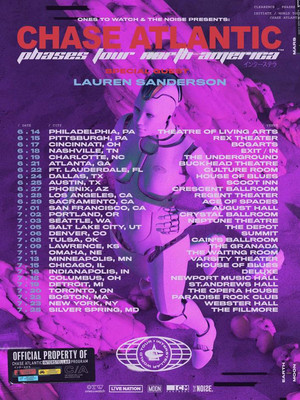 With a style that blends across genres like hip-hop, R&B, and rock, the EP examines relationships, debauchery, and loneliness underneath smooth melodies and slick production.

Before making waves under the moniker Chase Atlantic, the Australian trap pop trio cut their teeth in boy band What About Tonight and lit up Ozzy TV screens as contestants on the country's season 4 of The X-Factor. Shying away from their bubblegum pop beginnings, brothers Clinton and Michael Cave and Christian Anthony reformed and experimented with a heady blend of contemporary hip hop, trap, pop and rock.

Growing an organic online following through multiple self releases and touring, Chase Atlantic landed a deal with Warner Brothers thanks to their tireless self-promotion and viral success of hit single Friends. Celebrating the release of their third EP Don't Try This, the outfit hit the road on the Phases North American Tour, bringing along Youtube sensation Lauren Sanderson as support.

Sound good to you? Share this page on social media and let your friends know about Chase Atlantic at Varsity Theater.