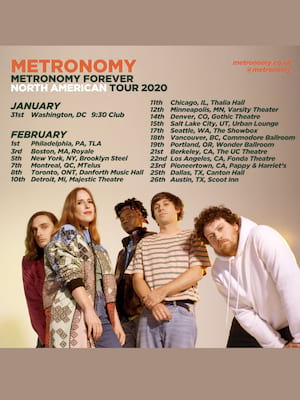 There's only one way to say it: Metronomy are just a really cool live band. They never disappoint.

British electronic-indie group Metronomy will be heading out on a tour of the USA and Canada in January and February 2020, in support of their new record Metronomy Forever. The stateside stint of their world tour commences in Washington on January 31st, continuing with shows throughout North America before closing in Austin on February 26th.

Beginning in 1999 as the solo project of frontman Joseph Mount, Metronomy eventually expanded into the 5-piece outfit they are today, with a unique sound mixing elements of electronic, pop and indie music gaining international critical acclaim. Across 6 studio albums Metronomy have become one of the most influential current bands of their genre, with a nomination for the Mercury Prize in 2011 and previous tours alongside Coldplay, Azelia Banks and Bloc Party.

Sound good to you? Share this page on social media and let your friends know about Metronomy at Varsity Theater.