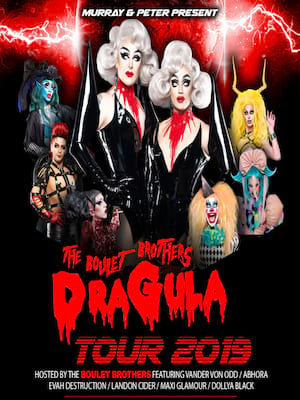 Get ready to see all your favorite spooky queens from the reality show including some contestants from the all new Season 3 of Dragula.

Competition show The Boulet Brothers' Dragula will be taking the act to stages across the country just after the release of the third series of the show, premiering on Amazon Prime. What started out as a YouTube show quickly gathered a cult following, leading to the show hitting Canadian network OutTV in 2016.

Dracmorda and Swanthula Boulet who are known collectively as The Boulet Brothers created the Dragula TV series after being inspired by their own monthly club event ran in Los Angeles and San Francisco and occasionally in New York and Texas. Today the show is one of the only of it's kind and the 'Search for the World's First Drag Supermonster' hits the stage.

Seen Dragula? Loved it? Hated it?

Sound good to you? Share this page on social media and let your friends know about Dragula at Pantages Theater.