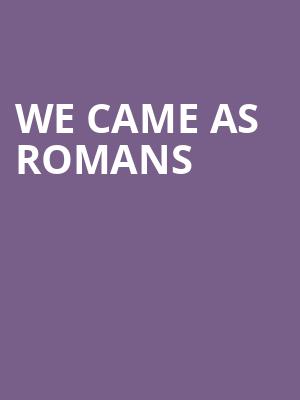 We Came As Romans

If you've never seen WCAR play live, you must - sooner than later. In all honesty, all six WCAR members are bouncing or flailing or jumping around while playing, for over an hour.

Why See We Came As Romans?

To plant a seed 10th-anniversary tour

Metalcore band We Came As Romans prepare to grace venues across America on the To Plant A Seed 10th Anniversary tour, giving fans one last time hear their debut record live in its entirety before they retire it from their concert setlist forever!

The band formed in 2005 and are known for their post-hardcore sound that comprises of a more commercial version of heavy rock and death metal, with their lyrics being largely about togetherness, brotherhood, and morality. Created by high school seniors, the band has seen many line up changes with lead guitarist Joshua Moore being the only original member.

Support for the tour comes in the form of a trifecta of awesome groups - The Devil Wears Prada, Gideon and Day Seeker.

Seen We Came As Romans? Loved it? Hated it?

Sound good to you? Share this page on social media and let your friends know about We Came As Romans at Skyway Theater.