Sorry! You missed Destiny of Desire at Mcguire Proscenium Stage 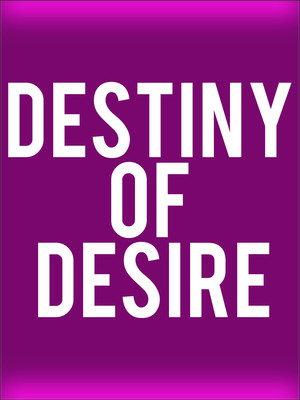 The communal spirit of Zacaras' play, in short, is beautifully embodied in this humorous tribute to telenovelas.

Why See Destiny of Desire?

Laugh out Loud at This Modern Mexican Comedy

Destiny of Desire tells the hilarious story of two baby girls born at the same time who go on to lead very different lives. The newborns are switched by a former beauty queen and one leads a life defined by privilege, while the other's is steeped in poverty. The girls finally meet each other when they turn 18, this is where the funny drama begins and they are able to answer the question, how does the other half live?

The play was penned by award winning playwright Karen Zacaras who has used the Mexican telenovela genre to create a funny and modern day comedy full of drama. Zacaras is best known for 'Mariela in the Desert' which received great acclaim and the National Latino Playwriting Award.

Seen Destiny of Desire? Loved it? Hated it?

Sound good to you? Share this page on social media and let your friends know about Destiny of Desire at Mcguire Proscenium Stage.