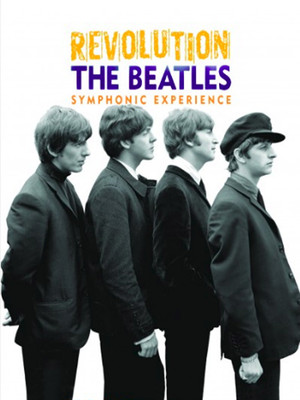 The legacy of The Beatles comes to life in Revolution!

The Band that changed the world

The Fab Four take on a whole new challenge in this brand new audio and visual experience from Grammy-winner Jeff Tyzik that elevates John, Paul, George and Ringo's legacy into a stunning symphonic spectacular befitting the world's concert halls. Featuring new arrangements of classics from all stages of the band's career and incredible photos, some never seen before, from Abbey Road's meticulous Beatles archive, this is the perfect show for any fan of the four mop-topped lads from Liverpool to come together and enjoy!

From the infectious pop melodies of the She Loves Me era to the innovative sounds found on genre-defying albums Abbey Road and Sergeant Pepper's Lonely Hearts Club Band, The Beatles are one of the most influential bands in the history of popular music. Despite their break up in 1970, their music has continued to be a source of inspiration and joy, as evidenced by continual re-releases, movies, documentaries, retrospectives, books and shows such as this that capture our fascination year on year.

Don And Shirley : “The best live Beatles experience ever (other than The Beatles!)”

This project blew us away. We’re huge Beatles’ fans and we’ve seen... more

Denise Shaw: “This is the Hamilton of orchestra shows”

OMG, my husband and I haven’t seen anything this good since Hamilton.... more

Sound good to you? Share this page on social media and let your friends know about Revolution - The Beatles Symphonic Experience at Orchestra Hall.